Book Review: Ours Are The Streets 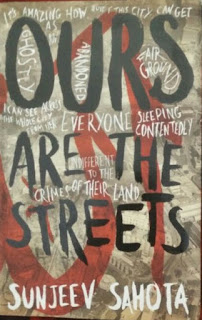 While roaming about in the market during Christmas, I came across a makeshift book stall in the market. So going by my nature, this can never happen if I can go past any book stall without noticing or grabbing any book.This time, it was 'Ours are the streets' written by 'Sanjeev Sahota'.

Ours are the streets was not a comfortable read and similarly is not easy to review. The book is written with first person perspective. The narrator, Imitiaz, is a Pakistan origin and born in Britain. The story revolves around how he becomes a religious person when he visits Pakistan after the death of his father. He was radicalised there to be a suicide bomber ( though author have not much elaborated the religious part). He keep on avoiding his wife, Rebekah. Much part of the story happens inside the mind of the narrator. The story also describes the difference of moral values between Pakistani origin and British people. Imitiaz 's parents want Rebekah to drop her child that was conceived before her marriage to Imitiaz.

I liked the way author has described the situations and the way he handles different characters while keeping the first person account.He has perfectly captured the mental and emotional thoughts inside the mind of a suicide bomber. The night before he is going to blow himself up, he tells everything to Rebekah. I liked the way how author ended the novel, when Imitiaz started running away from Rebekah and calling his (dead)father, Ammi to be his side.The writer keeps it to readers to guess what may have happen in the end. If Rebekah called the police , tells them everything or Did Imitiaz bombed himself as planned.

However , the way the writer narrated the story was rather complicated.It was difficult to figure who the narrator is addressing. One could only found out it at the first mention of the second person.
Also, it keeps changing suddenly.Sometime, he would be addressing his father and immediately it would change to his wife.Also, two stories run at time, one is the current story about him living in Britain with his wife, other one in which he went to Pakistan, met few persons, get influenced and come back with his cousin.

Above all, it was an engaging story, once started I could not stop to know what is going to happen next.

Posted by Unknown Anonymous at 8:09 PM