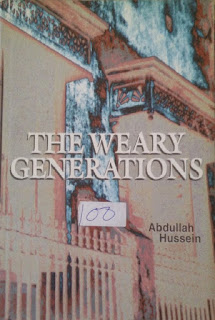 Few days ago, while wandering usually, I came across a book shop in Delhi that had put up a sale on old stock. As an admirer of books, I searched through it and got my hands on a novel based on India during 19th and 20th century when we were still under British rule.

The book 'The Weary Generations' is an English translation of an Urdu novel 'Udaas Naslein' written by Abdullah Hussein.It revolves around a character Naim, who after studying at Calcutta(Kalkutta), returns to his village Roshan Pur and helps his father in agriculture.Later during the WWI, he was
recruited into the army , where during his fight he lost his arm.After coming back to home, he was given a lot of land as bravery award from British Government.However he lost all of it when he was arrested and sent to gaol when he was working for congress for independence.He has a silent on and off relationship with his wife Azra.Naim silent listens to the his step brother Ali's adventures when they moving to other country after partition has been announced. On the way to new country, he is killed.

In the novel, I liked the way writer has explained his characters and all around environment in every event.One can truly imagine the things happening before the eyes with such an explanation. However, I felt for Alisha. There should have been more part for Ali,Rawal and Alisha. I don't know what happened to Alisha and how she died. There was nothing about Ali's second sting in Lahore.

Overall, I am happy about the book and after a long time I found a book that was overwhelming and had a good coverage of historical events during independence movement.

Posted by Unknown Anonymous at 9:52 AM